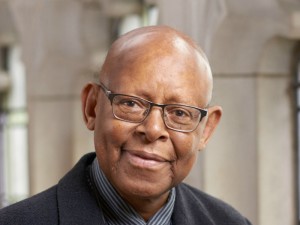 We are grateful to God for the life of Prof Rev. James Hal Cone and the intellectual rigor and passion in the service of justice, especially against racism of all sorts. He embodied the struggle against racism and white supremacy without faltering for five decades of his socially engaged scholarship. As he passes on, the lamb of his voice remains loud and clear, proclaiming justice in the valleys where demons of racism continue to haunt our world. His voice remains a call to all us–reminding us that the struggle continues.

We have been so blessed to have Rev Prof James Cone as our teacher and pastor. May his soul rest in peace. A luta Continua!”  Musa W. Dube, Botswana

“Indeed, blessed are we whose lives coincided and overlapped, for a while, with that of James (Jimmy) Cone. The influence of James Cone in Africa is greater than it is often imagined. I am aware of at least two key African theologians supervised by Jimmy – one a Malawian and the other Emmanuel Marty in Ghana. Not to speak of his enormous influence in (South) Africa – Itumeleng Mosala, Jean Marc Ela, Gabriel Setiloane, Takatso Mofokeng, Desmond Tutu, Gideon Khabela, Cecil Ngcokovane, Simon Maimela, Allan Boesak to mention but a few.

We talk a lot about innovation today. James Cone is a theologian who innovated and originated an entire political philosophy and theology. No one has captured the scandal at the heart of colonial Christianity better. Nobody has captured the tragedy of black Christian faith better. As Vuyani Vellem has said to me, James Cone’s “The Cross and the Lynching Tree” is such a fitting final chapter from this theological titan. Here is a man who uttered the most frightful phrase of his time – Black Theology. The two, theology and blackness, had never been imagined together. They never were conceived side by side. To utter the phrase was ‘heretical’ and ‘career limiting’ even for a Karl Barth student that Jimmy Cone was.

Let us think together about ways of deeply honoring his memory.” Tinyiko S. Maluleke, South Africa

“May the legacy of Jim Cone continue to spur on generations to come.”  Mercy A. Oduyoye, Ghana

“I think of the many scholars that come to mind, it is safe to say Professor James Cone revolutionized theology and the theological imagination and its praxis in relation to the Black world. The rest is a great intellectual tradition. It will be fitting to do a big conference to honor him in Africa.”                                Elias Kifon Bongmba, Cameroon

“May the man who inspired me, and so many others, rest in peace. His legacy lives on in his manifold works and the work of liberation. A luta continua!” Robert Wafawanaka, Zimbabwe

“He has left a mark with his brand of theology; authentic, contextual and emancipatory. He has begotten daughters and sons who have taken up the baton and are running with it. I have a copy of Theological Studies vol.61 (4) of 2000 entitled “The Catholic Reception of Black Theology.” I had marked in it the following words from the editor, Michael Fahey, “After long silence, Theological Studies has begun to make amends for its shameful avoidance of the evil of racism in the United States. To accomplish this task, the editorial board has invited a team of African American Catholic theologians to reflect of this painful neglect especially in the light of the thirtieth anniversary of Black Theology of Liberation by James Cone, who also participates in this analysis.” I have stubbornly kept this copy to myself. Others I have read and I cannot even remember where they are. When I am down and in despair, I am encouraged by Cone’s words,

It seems that there is nothing Black people can say or do that will wake White theologians out of their slumber. But we must keep trying to shake them out of their indifference to “one of the most shameful scandals of modern Christianity.” Racism is a profound contradiction of the gospel. No one, absolutely no one can be a representative of Jesus and treat others as subhuman. There can be no compromise on this point.

“Dear Colleagues. Professor James H. Cone is one of my Mentors. I first met him 6-8 June 1973, during the first meeting between African and African-American Theologians, which he hosted at Union Theological Seminary. The meeting was labeled “exploratory”, and I was the youngest among the eighteen of us. Those of us from Africa included Professor John S. Mbiti (Kenya); Professor Kwesi Dickson (Ghana); Professor Christian Gaba (Ghana); Professor Edward Fashole Luke (Sierra Leone); Rev. Desmond Tutu (then with Theological Education Fund), and me, Jesse Mugambi – then at the University of Nairobi. The African Americans included Prof. James H. Cone; Prof. Gayraud Wilmore; prof. Charles Long; Prof. Herbert Brown; Prof. DeOrtis Roberts; and Prof. Princeton Williams; Dr. John Bennett; Mr. Shelby Rooks and Mr. George Thomas.

In November -December 1975 I was privileged to facilitate Professor Cone’s participation in the WCC Fifth Assembly at Nairobi. His well attended public Lecture at the Catholic Chapel within the precincts of the University of Nairobi remains memorable to me, particularly because of the exchange of perspectives between him and prominent European Professors. Cone brought some copies of his books, which might have been the first parcel of his publications to reach Nairobi.

These encounters have remained embedded in my memory, and constitute an integral part of my perception of what contextual theologizing is about. It is my hope and prayer that Professor Cone’s legacy will remain exemplary for African theologians, as it has been for African-American theologians across the Atlantic. There are many traits in Professor James Cone for each of us to emulate.” Jesse Mugambi, Kenya

“Thanks, Colleagues, for sharing the sad news with me. May Prof. Cone’s (Jim’s) soul rest in peace indeed. Apart from the many phone calls over the years with him while I was still in North America–going back to 1986–the two years that stand out for me are 1999 and 2004: 1999 when I sat at the dinner table conversing with him (and others) at Union Theological Seminary (NY) when Prof. Wimbush (Vincent) hosted me there as a South Africa-based Translation Consultant with UBS then (before his [Vincent’s] move to Claremont) during his (Vincent’s) memorable international and interdisciplinary conference out of which came the volume, African-Americans and the Bible: Sacred Texts and Social Textures which he (Vincent) edited (Continuum); and 2004–thanks to Anthony Reddie, who, as Editor of Black Theology: An International Journal, published Jim’s memorable article on White America’s Great Sin (racism) just ahead of my own article on a postcolonial approach to Bible translation in Africa and its “Anglophone” diaspora. Again, may Jim’s soul rest in peace and his legacy never die.” Yes. A Luta continua.” Gosnell Yorke, Zambia

“Thank you all for sharing these memories and tributes. May I add my tribute as a white South African who was graciously received by him when I first visited Union (as the guest of Vincent Wimbush and Phyllis Trible) in 1993. Prior to that I had attended one or two SBL/AAR meetings in the USA and had made a point of listening to as many of James Cone’s papers as I could. As Tinyiko and Jesse have said, James Cone made an immense impact on African Theology and South African Black Theology, and so I was eager to drink from his wells of living water.

I was apprehensive meeting him for the first time in 1993. As a white South African I was not always sure how I would be received by Black theologians. James Cone was remarkably warm and welcoming then, and in the many years since.

Our School has a formal PhD seminar relationship with Union (and other theological institutions). We rotate between our institutions. This year we are hosting the PhD seminar, and we had tried our utmost to persuade James Cone to come as part of the Union group. His eyes would twinkle, and he would smile, but he would shake his head and say that he did not want to undertake such a long journey.

He has taken people like me on a much longer journey. Hamba kahle, Baba.” Gerald West, South Africa

“James Cone was certainly one of the greatest. We miss him. I will miss in particular his presence in AAR sessions; The discussion around his book, The Cross and the Lynching Tree, remains marked in my memory. But I imagine one of his greatest books remains Martin & Malcom & America: A Dream or a Nightmare. His legacy remains; May he rest in peace.” Elochukwu E. Uzukwu, Nigeria

“May he indeed rest in peace and rise in glory!” Dora Mbuwayesango, Zimbabwe

Congratulations to Prof Musa Dube on this honour! 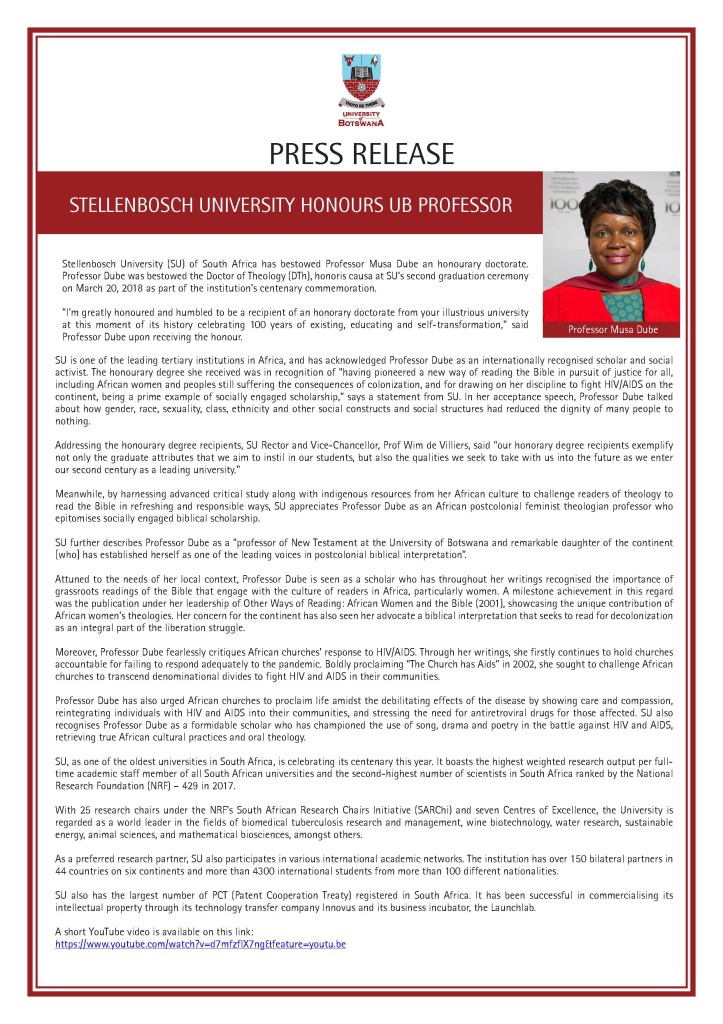