We are delighted to announce the upcoming release of an important textbook and teaching resource co-authored by Adriaan van Klinken, Laura Grillo and Hassan Ndzovu: Religions in Contemporary Africa (Routledge 2019). AASR members receive a discount of 20% when they purchase the book from www.crcpress.com. Simply enter the code HUM19 at the checkout to receive the discount.

Religions in Contemporary Africa: An Introduction 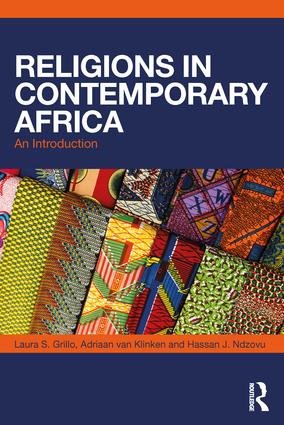 Religions in Contemporary Africa is an accessible and comprehensive introduction to the three main religious traditions on the African continent, African indigenous religions, Christianity and Islam. The book provides a historical overview of these important traditions as well as focus on timely topical issues to illustrate the role that religion plays in African societies today.

With suggestions for further reading, discussion questions, illustrations and a list of glossary terms this is the ideal textbook for students in religion, African studies and adjacent fields approaching this subject area for the first time. Scholarship on East Africa has generated valuable insights into topics central to Africana religious studies, topics such as diaspora and migration, slavery and colonialism, orality and textuality, race and ethnicity, contact and encounter, women and gender, resistance and resilience—all as they connect to religion. Yet, given the predominance of the transatlantic in Africana studies generally (the centrality, for example, of the “black Atlantic” framework), empirical support for and theoretical reflection on Africana religious studies have tended to privilege regions surrounding the Atlantic Ocean: West Africa, North and South America, and the Caribbean. It is perhaps unfair to associate this geographic orientation with the Euro-American academy’s deep-seated “western” bias, but there is no question that the eastern shore of the African continent has thus far, with some exceptions, been peripheral to Africana religious studies as a field. Ther

e is no good reason for this given that the transatlantic slave trade involved also East African populations. Moreover, well before the arrival of Europeans and up to the present, East Africans migrated and interacted within the continent, Arab and Asian influences manifest along what came to be called the Swahili coast, and African diasporas spread across the Indian Ocean.
The aim of this roundtable, to be published as a collection of short (1,500-3,000 word) essays, is to bring East African perspective to bear on Africana religious studies. Presuming that the transnational and translocal priorities of Africana studies pertain to East Africa no less than they do to regions better covered, the roundtable will gather issues, questions, theories, and concepts emerging from East Africa, the Swahili coast, and/or the Indian Ocean that potentially shed new light on the study of Africana religions. It is anticipated that the theme of encounter—between regions and between religions—will run through most essays, finding expression in such topics as: religious identity at the intersection of two or more religious cultures (Islamic, Christian, indigenous, and even Asian); the long history of Arab and Islamic influence on African religions, cultures, and languages; the place of religion(s) in the region’s precolonial, colonial, and postcolonial periods; religiously themed scholarship and literature on and from the region; and diasporic encounters beyond Africa’s eastern shores. This is just a sampling of the kinds of topics welcome; many others could be named. However framed and however focused, contributions should highlight the significance of religion among African-descended people in East Africa or the wider Indian Ocean, and should be grounded in research or reflections pertaining specifically to at least one segment of this dynamic regional complex.

All those interested in contributing should submit a 150-word proposal to journal@africanareligions.org by April 15, 2018. Final drafts of essays are due on August 15, 2018.

AASR Vice President and Echidna Global Scholar Dr Damaris Parsitau, has recently been awarded a prestigious one-year Research Associate Fellowship in the Women’s Studies in Religion program at Harvard Divinity School. She will take up the position from 15th August 2018-July 2019 and will be working on a research project on “The Kingdom of Holy Women, Pure Girls and Born Again Bodies: Pentecostalism, Sex and Women Bodies in an African Church.”

Dr Parsitau is currently Senior Lecturer in Religious and Gender Studies and Director of the Institute of Women, Gender & Development Studies at Egerton University, Kenya. She holds a PhD in religion, gender and public life from Kenyatta University (2013) and has previously held visiting fellowship positions at the Brooking Institution in Washington DC, The College of William and Mary in Williams, Virginia, USA, the University of South Africa, the University of Cambridge, and the University of Edinburgh.

We warmly congratulate Dr Parsitau with this achievement and wish her a very inspiring and stimulating time at Harvard!

The African Association for the Study of Religions holds its biennial conference on the theme “Revisiting Religion, Politics, and the State in Africa and the African Diaspora”, in Lusaka, 1-4 August, 2018. Please find the general Call for Papers here.

As part of this conference, we plan to convene a panel on the theme of “Religion, LGBT Activism and Queer Politics in Africa”. Moving beyond a focus on the politicisation of homosexuality and LGBT rights by the state as well as by religious actors, in this panel we draw attention to the counter-mobilisations of LGBT activists and allies. We solicit papers that examine the strategies and methods of LGBT activism in various parts of the continent, specifically exploring the ways in which LGBT actors appropriate, negotiate and reclaim religious beliefs, practices and symbols. Papers not only investigate the relationship between African LGBT activism and faith, but also explore the underlying queer political and religious imaginations informing. Hence the panel as a whole seeks to make a twofold intervention: putting the category of religion central in the emerging field of African queer studies, and putting matters of sexual diversity and queer politics central in the field of African religious studies.

Anyone interested in being part of this panel: please submit a 300 words abstract, as well as your contact details (name, position, institutional affiliation, email address, and phone number), to the conveners by email (chitsa21@yahoo.com and a.vanklinken@leeds.ac.uk) by 15 January, 2018.

Vacancy in African Studies at the University of Leeds

The University of Leeds (UK) currently advertises a lectureship in African Studies, with religion being one of the areas of specialisation. Application deadline 10 July. Find more information here.