Dr. Afeosemime “Afe” Adogame, the Maxwell M. Upson Professor of Christianity and Society at Princeton Theological Seminary, has been appointed Professor Extraordinary at Stellenbosch University for the next three years. This honorary position is awarded to select individuals in recognition of their proven specialized experience and eminence in their profession and field of study. 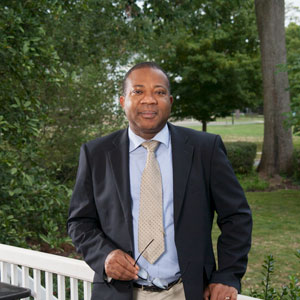 A member of Princeton Theological Seminary’s History & Ecumenics department, Dr. Adogame’s teaching and research focus on the new dynamics of religious experiences and expressions in Africa and the African Diaspora. In particular, he is interested in African Christianities and new indigenous religious movements, and the relationships between religion and migration, globalization, the economy, politics, media, and civil society.

Dr. Adogame has authored and edited numerous published works related to these subject matters, including 2014’s The Public Face of African New Religious Movements in Diaspora: Imagining the Religious ‘Other’. He played an instrumental role in the Seminary’s Currents, Perspectives, and Methodologies in World Christianity conference in January 2018.

Regarding his appointment, Dr. Adogame says, “I am deeply humbled to be recognized and appointed as Professor Extraordinary by Stellenbosch University. Princeton Seminary and Stellenbosch share a commitment to preparing engaged global citizens and responsible leaders for today and tomorrow, leaders poised to use their expertise to serve the ‘world church’ and society. I am delighted to identify with this pathway toward cementing cooperation, collaboration, and reputation as world-class institutions.”

The AASR sends many congratulations to Afe on this well-deserved appointment!