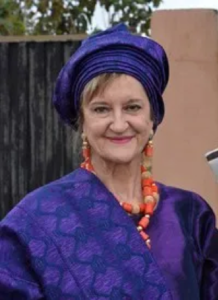 The African Association for the Study of Religion congratulates Professor Rosalind I.J. Hackett, University of Tennessee Chancellor’s Professor and Distinguished Professor in the Humanities and Religious Studies, for receiving an Honorary Chieftaincy in Nigeria. The Honorary Chieftaincy was bestowed by His Royal Majesty Oba (Dr) Michael Odunayo Ajayi when he celebrated the fifth anniversary of his coronation as the Elerinmo of Erinmoland, on August 9-10, 2019. At the ceremony of investiture and the celebrations that followed, Hackett and other honorees received the insignia and formal wear befitting their chieftaincy status. She was granted the title of “Yeye Meye of Erinmoland” (Mother who knows our ways).

Hackett was honored for her research and the work she has done for the African Consortium for Law and Religion Studies (ACLARS) for nearly a decade. Hackett is a founding member of ACLARS and serves on its board, as well as playing an active role in planning the highly successful ACLARS conferences in Africa. These annual conferences have created a vibrant forum for African scholars of various disciplines to address critical contemporary issues at the intersection of law, human rights, and religion.

Hackett was pleasantly surprised by this honor and told her colleagues at the University of Tennessee: “It comes at a time in my career when I was taking stock of all the research, teaching, mentoring, and conference planning I have conducted in Africa and beyond over the years. It’s a delight to get this recognition.” Starting from her undergraduate student days in the United Kingdom, Hackett has maintained an abiding presence in Nigeria with more than nine years of research and teaching, making Nigeria her second home. Hackett has done research in more than twelve African countries, spending the most time in Nigeria, Uganda, South Africa, and Ghana. Hackett’s interdisciplinary research has focused on cutting edge issues on African and Indigenous Religions, New Religious Movements, Religion and Art, Conflict and Peace, Religion and Gender, and Religion and Human Rights. Drawing theoretical insights from anthropology, sociology, religious studies methodologies, Hackett has studied and published well-received books and essays on religion and the media, religion and sound, and the growing influence of Pentecostalism in Africa.

Many scholars of Africa and the majority world know Hackett as the person to turn as a mentor in scholarship and the many ways of understanding and interpreting the human condition. Hackett’s work in Northern Uganda built international collaborations that brought together artists and musicians through the Jazz for Justice project. Hackett has served on numerous committees and editorial boards of scholarly journals boards around the world. She is a Past President and Honorary Life Member of the International Association for the History of Religions (IAHR). She currently serves as Vice-President of the International Council for Philosophy and Human Sciences (CIPSH). As members of the African Association for the Study of Religions, we proudly say Hail to the Chief! 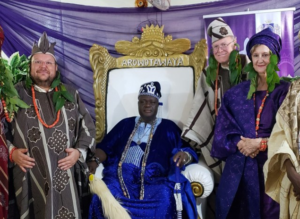 Credit: Additional information from Brian Canever, and Addie Morton of the University of Tennessee. https://news.utk.edu/2019/09/16/hackett-receives-honorary-chieftaincy-in-nigeria/